9 Best Underwater Hotels in the World

Our research is editorially independent but we may earn a commission for purchases made through our links.

This romantic resort in Zanzibar has a number of luxury accommodations to offer travelers a retreat while exploring this picturesque island oasis. However, The Manta Resort is best known for its three-level underwater room that lies 13 feet below the surface. Only accessible by boat, this private accommodation has a top deck perfect for sunbathing, while the bottom floor is completely submerged underwater. This underwater hotel room offers 360 degrees of underwater views, so you can truly get a sense of underwater life.

Atlantis The Palm in Dubai is found on the iconic palm-shaped island, an artificial, man-made island structure. No room in this luxury hotel will disappoint, however, the two underwater suites here are truly remarkable. With floor to ceiling windows, these underwater rooms boast views of the 65,000 underwater creatures that live among the ruins of the “lost city of Atlantis.” If the views don’t impress, the service will, as suites also come with a personal butler.$20 for your 1st month of phone service.Ad by Visible See More

Found in the bucket list-worthy Maldives, Conrad Maldives Rangali Island is home to villas, suites and a three-bedroom villa that features an underwater bedroom. However, the bedroom in the Muraka house isn’t the only place to experience the wonder of the sea here. Ithaa, an underwater restaurant on the island, is situated 16 feet below the water’s surface. This upscale establishment offers an intimate experience as there are only 12 seats available. Expect a menu full of delectable and locally-sourced seafood options. Known as the first “all glass undersea restaurant,” dining here will truly be a once-in-a-lifetime experience.

Resorts World Sentosa is found on Singapore’s island of Sentosa and is home to one of the world’s largest aquariums. Guests here can book a two-story townhouse along the aquarium for an underwater experience. These suites offer upstairs access that leads to a patio above the surface, while the lower level features underwater views.

Built inside an abandoned quarry, this luxury resort found 30 miles from Shanghai, China is a unique accommodation that has two underwater floors. Opened in 2018, Shimao Wonderland Intercontinental boasts incredible views of the surrounding natural scenery. If you can’t book one of the underwater suites, there is a restaurant here, Mr. Fisher, that is found one level below the water’s surface, so you can still enjoy an underwater experience without booking a lower level room here.

Another underwater Maldives hotel to consider for your next vacation here is Huvafen Fushi Maldives. This boutique hotel doesn’t have underwater rooms but underwater treatment rooms for its onsite spa, Huvafen Spa & PEARL. There is nothing more relaxing than receiving a massage while surrounded by the soothing colors and sounds of the ocean. Guests here not only enjoy the underwater spa but also a private white sand beach, infinity pool, and premier snorkeling spots here.

Visit the world’s first underwater club at Niyama Maldives. This Maldives resort is home to Subsix, which is found 20 feet below the surface of the water. You don’t have to be a night owl to enjoy this subsurface club. You can reserve the club for your wedding or private party. However, Subsix is also open to the public for breakfast, lunch and dinner too. For many, dancing under the sea is a great way to end the night in this beautiful spot in the Indian Ocean.

This modest underwater hotel is found in Sweden. The Utter Inn isn’t necessarily a luxury accommodation like others found on this list, however, this underwater lake hotel offers a unique experience for those visiting Sweden. Accessible only by boat, guests enjoy sunbathing on the wooden deck above the surface, while embracing undersea views down below in the rooms. This underwater hotel is one of the most affordable aquatic lodging options on this list.

This Key Largo underwater hotel has a unique stipulation to stay here – you must scuba dive down 21 feet to reach this underwater abode. If you’re not a certified diver, expect to spend a couple of hours in a diving course before you can head below to your night’s destination. Jules Undersea Lodge is the only hotel on this list that is completely underwater. The lodge has all the comforts of home though, such as a full kitchen, hot showers, and entertainment options like music, movies and books. And of course, there are outstanding views of the ocean and marine life too.

7 Things You Should Know About the Future of Underwater Cities

Living underwater is actually possible, and you could be moving to an underwater city in the near future. By  Donovan Alexander October 23, 2020 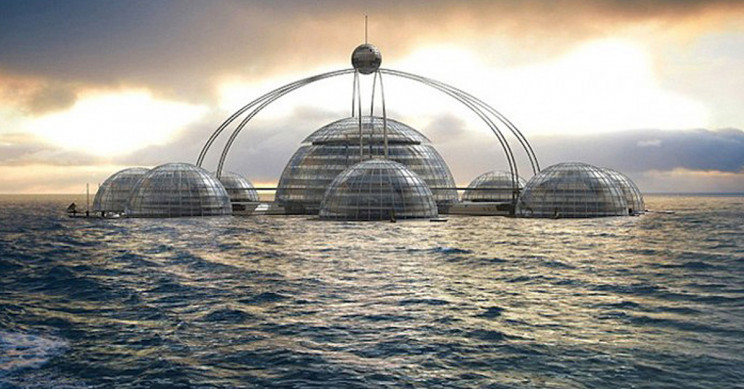 The idea of humans living underwater may not be as crazy as you think. An idea once reserved for video games or science fiction, underwater cities may be a viable solution for humanity in the distant future.

Would you pack up your bags, clear out your apartment, and move to an underwater paradise? Perhaps you might even dream of living like the fictional city of Atlantis. If it makes sense to go out and colonize Mars, the ocean is just as livable and is far closer to home. As you probably already know, the earth is 71% water. This could be prime real estate for future generations.

However, there are promising new horizons in the world of the underwater living that could tackle these issues and have you or your future children living comfortably underwater in the coming years.

1. Underwater cities are not a new idea

Though not as frequently touted as some forms of space colonization, underwater living has titillated futurists since the beginning of the 20th century. However, it was the iconic ocean explorer Jacques Cousteau who made this idea a reality, bringing it to fruition in the early 1960s.

For the uninitiated, Jacques Yves Cousteau was a French oceanographer, researcher, filmmaker, and undersea explorer, who was largely responsible for igniting the interest of the general public in the ocean, and the eventual possibility of underwater cities.

Cousteau was so passionate about understanding and exploring the world’s oceans that he created the famous Conshelf series of underwater habitats.

The structures allowed ‘oceanauts’ to live underwater for days, or even weeks at a time. Each iteration of the shelters (Conshelf I, II, III) improved over time, eventually allowing six oceanauts to live underwater at a full 328 feet (100 meters) below the surface.

Cousteau’s efforts to colonize the ocean laid the foundation for the future of underwater cities. In fact, Conshelf sparked a craze, and in the late 60s and early 70s, more than 60 underwater habitats were dotted across the seabeds, with names like Sealab, Hydrolab, Edalhab, Helgoland, Galathee, Tektite, Aquabulle, Hippocampe.

2. The depth of the colony affects everything

How humans breathe underwater, and the depth of the structure, are correlated, dictating how the structure should be created and the mixture of air humans will need to breathe in their underwater city.

First and foremost, it appears that humans should not build colonies deeper than 1,000 feet (300 meters), and ideally at much shallower depths.

This is because the pressure at these depths would not only require very thick walls but would also require lengthy periods of decompression when returning to the surface.

At these depths, humans need to take extra measures to ensure that there is a healthy ratio of oxygen to other gases in the air, as the body requires varying levels of different air components when at pressure. Plants and artificial light could possibly be used to supply some oxygen, but depth, nitrogen, or helium would also be needed.

3. Food wouldn’t be a problem in our underwater city

The good news is that living on the ocean floor could provide humans with ready access to seafood and sea plants. There are aquanauts who are currently living underwater, who are able to partially support themselves via spearfishing, combined with canned and preserved foods.

Even more so, more traditional meals and even freshwater could be transported through tunnel or hose systems connected to the surface.

4. Living underwater will give us a better understanding of the ocean

The idea of living underwater is of particular interest to scientists around the world, including marine biologists. Scientists and researchers have better maps of Mars than they do of Earth’s own ocean floors. To this date, humans have only explored 3% of the ocean.

Living underwater could also help give scientists a better understanding of the planet and the evolution of life on Earth. Not to mention, there are likely a host of resources still to be discovered on the ocean floor.

Experts predict there could be an unquantifiable amount of minerals and metals that could be used to improve humanity and even help with the further construction of underwater cities.

5. There are architects already working on underwater city plans

Architects at the Shimizu Corporation have already designed a $26 billion project to create an underwater city. According to the Tokyo-based company, their project would allow thousands of humans to live very comfortably underwater.

Though most of it is still just a concept, the Ocean Spiral City would sit below sea level off the coast of Tokyo. With its massive turbines, the city would power itself through the power of waves, tide, and ocean currents, supporting those who lived on the structure.

The structure would be able to support 5,000 people, and would include labs, schools, and beautiful residential areas. The underwater city could become a reality by around 2030.

6. The technology already exists… Sort of

Right now, humans have the ability to create underwater colonies that could support upwards of 100 people. As a biology professor at Stanford University Ian Koblick states, “There are no technological hurdles. If you had the money and the need, you could do it today.”

Constructed with steel, glass, and special cement, habitats are more likely to have a modular design than the more popular conception of a big, underwater bubble or dome.

Structures could be added or subtracted from the underwater colony to help fit population needs. Larger underwater colonies are already feasible. What keeps them from coming into fruition is a lack of interest, motivation, and funding.

7. It could help preserve humanity

Hopefully, it won’t get to this, but living underwater could help to save the human species in the case of a major apocalyptic event. Philip Pauley, founder of the London-based visual communications consultancy Pauley, has designed a self-sustaining habitat that could save 50-100 people during a disaster scenario.

One way to combat the growing threat of war, limited resources, or global warming may come from moving populations underwater.

Would you live in an underwater city? You may not get the full Rapture experience yet; however, there are already restaurants and hotels that are popping up around the world that allow people to experience limited underwater living. It is probably more comfortable than living on Mars.